St Arsenije of Srem
The Second Archbishop of Serbia

St. Arsenije, the second archbishop of Serbia, was the most ascetic of the brotherhood and the most responsible student of Saint Sava. Regarding his spiritual development, the founder of the autocephalous Serbian church was particularly concerned for and tried to protect his spirit. He would successfully develop the young serbian archbishop, which was crucial for the serbian state and its public life throughout the middle ages. In his history, the excellent biography written by the archbishop Danilo II, he states that St. arsenije was a native of srem, of which historical records show that the medieval territory included present-day Srem and Posavina, the Kolubara valley, all the way to the regions’ limits.

Indeed, the politics of Hungary separated the Srem region (Syrmia Ulterior Citerior et), of what is today’s Srem and “Srem” south of the Sava to the Kolubara. In order to resolve the issues with Hungary about the homeland of the successor of St. Sava, and place it not to the north of the eponymous river, interpreters of Danilo’s writings point to St. Sava’s interest in newcomers to zic, and especially the homeland. Also, if the young Arsenije had a role model in the only Orthodox monastery in Srem, it was St. Dimitrije in Sremska Mitrovica (which the sources of the Roman Curia refer to as “full of Greek monks” and “littered with schismatic misconceptions.”) In any case, the news and later traditions of the birthplace of the Serbian Archbishop point to other places north of the Sava and the Danube, between the mentioned rivers, whether it is the Bingula or Dabar near old Slankamen. 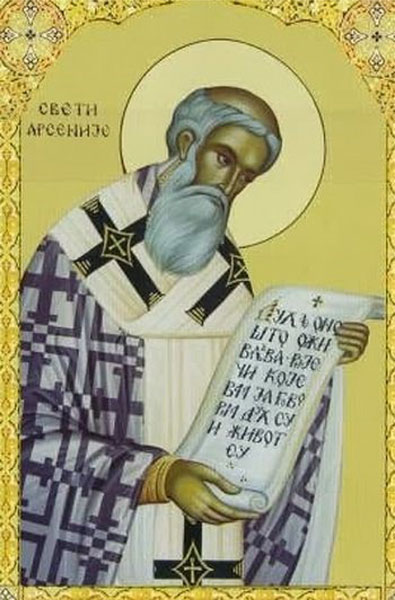 Second Archbishops of the Serbian Church

In the annals of the Serbian kings and archbishops is an extensive hagiography of St. Arsenic, written by Archbishop Danilo II. while the author aimed to show the prayerful and ascetic figure of another Serbian Archbishop, the text has still only a relatively small amount of confirmed historical facts that talk about Arsenije’s administration of the church and the church-political environment. He inherited the “throne of the Serbian archbishop and maritime countries” in 1233, on the personal commitment of Saint Sava, and after this withdrew to his second trip to the Holy Land. Archbishop Arsenije raised the Church of St.Apostles in Pec, setting it instead of Zic to be the seat of the Serbian Church, because Zic was too exposed to attacks by enemy armies. Together with King Vladislav, he ensured the transfer of the relics of St.Sava from Trnovo in Serbia and participated in the transfer of the chairs Ston bishop of the Monastery of the Virgin in the Monastery of St. Ston. Peter and Paul, on the Lim. Due to illness, he retired as head of the Serbian Church in 1263, and passed away three years later in Zick Crnča Metohija. He was buried in his memorial, at the Church Sv. Apostles in Pec.

History of the Transfer of Relics

The relics of the second Serb archbishop have a fair amount of written records. The record from the era of Patriarch John Kantulra (“Archbishop from Pec and Western Pomoria”), in 1604. state that the monestary in Pec holds the “sacred Serbian archbishop and the relics from the saints and the holy places: Arsenija, Evstatija, Nicodemus and other saints.”

The Metropolitan Mihalo, in Spa, Kratovo and Stipski, wrote in 1653: You, who sent the patriarchs from Pec, to “recover the relics of the holy fathers Arsenija, Evstatija, and Nicodemus and other holy persons”. In one handwritten record from the books of the Church of St. George in Prizren from 1737, G, describe the turmoil of the war years and the resettlement of the Serbian saints.

St. Evstatija was taken the other side of the Black River, Arsenija’s remains were scattered by the ungodly Scythians, with even just his head barely being recovered. Lord, a cruel fate has approached and we feel far from you – 31 March 1737.

According to a record from 1806, the relics of St. Arsenija are said to exist in the Dovolji Monastery in the valley of the Tara river. The monastery was raided in 1809, with its valuables and treasures gone, though the relics would have another fate: “a reliquary in Pestera, within the pits of the earth are they hidden. The monks of the Morackog Monastery were very bothered by it, trying to raise them, but the couldn’t.” In 1814, The Monk Joanik, as we know from a record in 1833, stated that in a monastery of the Trinity in Pljevaliska, the reliquary with the relics of St. Arsenija has been since returned – “In Hercegovina, in the Kelly monastery, in the dormition of the Theotokos, where lies St Arsenije, the Archbishop of Serbia”… The relics were then briefly in the Moraca monastery, and then were transferred to Ždrebaonik, Moracka Metohija. In 1884, on the orders of Prince Nicholas I of Montenegro, they were transferred to Kosijerovo Monastery. In 1920, from the Kosijerevo Monastery, they then returned to Ždrebaonik, where they remain today. Most likely, these are only a fraction of the complete relics of St. Arsenija, because at a certain reliquary Dobrićevo Monastery, in addition to a convent of the same name, many of the relics were kept until 1716.

Since the 15th century, the day of death of the second Serbian archbishop (October 28th), is taken as a day of celebration, with church services and holiday songs: “The month of October commemorates memories of our father among the saints: Arsenija, archbishop, the miracle worker” (Danilčev Tipik, 1416.). The development of the followers of St. Arsenija in medieval Serbia flowed spontaneously from his amazing revelations in the time of archbishop Sava II (1264-1271), when he was laid in his grave by his brothers, with his relics going in a reliquary. Medieval Serbian writings speak of miraculous cures: the sick young man from Srem, Greek monks and one woman. The oldest church service, written down by Danilo I, who in the time of emperor Dusan had his work slightly redacted by enemy agents for being “against the emperor”. Unfortunately, at the National Library of Serbia, a 19841 fire caused the loss of these manuscripts, from the ministry of St. Arsenija from the middle of the 14th century. One manuscript has disappeared without a trace after World War I. 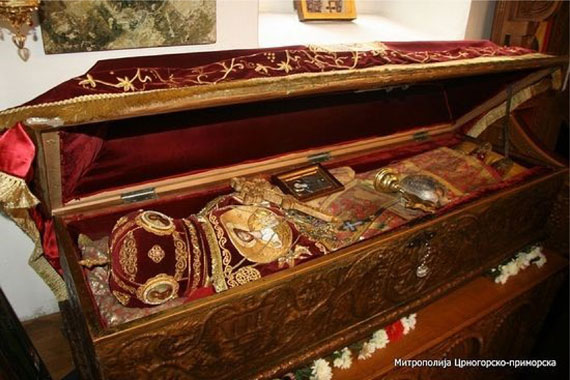 The Hieromonk Antim Radajkovic, in control of the Patriarchy at Pec, knew, as a monk of the monastery, the significance of St. Arsenije’s activities in one interesting item from 1853. He sang to his family:

“A glorious Serbian Patriarchy, from the west of the Bistrica River, you’re the mother of the Serbian land, the Ascension temple, Voznesenija, it’s your first Saint Sava, whose wife is pregnant with St. Arsenije”

The figures of St. Arsenije, next to the thumbnails in the manuscript, were painted with the Pec Patriarchate, Decani, Studenica, aryl, Sopočani, Zavala, Ježević, Matejić near Kumanovo, Podvrh near Bijelo Polje, Annunciation Kablarska, AND increasing number RECENT PERFORMANCES. Churches that are devoted to his name is being built are being torched, tery Sudikovo on the river Lim, puts the shelter. The Followers of St. Arsenija has a presence in Russia, with both official and unofficial sanctions since the mid fifteenth century.

In recent years, the followers of St. Asenija, the second Serbian archbishop, thanks to Russian political and church emigration after the Bolshevik revolution in 1917, travelled to the the Far East. In the eighteenth century, Count Sava Vladislavic, a Serb in the Russian Royal Service, built a church in eastern Siberia dedicated to St. Sava. A Russian Archbishop in Manchuria, who was in Kamchatsky and Seoul, asked in 1933 , that the Serb Patriarch Barnabas, which are laid in the chapel HOUSE OF MERCY In Harbin, the Manchurian city where he found many Russian refugees. On this occasion, Archbishop Nestor wrote akatist St. Arsene. A seminary in Karlowitz now has St. Arsenija as its patron saint.